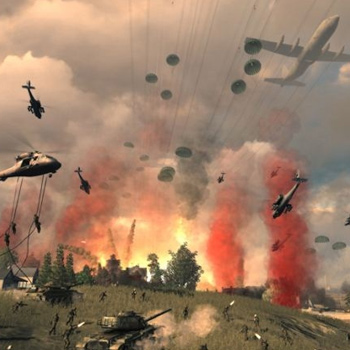 War is Coming Home. , 1989. To avoid certain collapse, the Soviet army boldly advances into Europe. NATO responds only to be met on a second front -- a diversionary attack on the American homeland. You are a field commander, leading the eras most powerful military machines in the campaign to retake s cities and suburbs. Superpowered Warfare - Unleash the arsenals of the great military superpowers in the gripping single-player story created by best-selling author and Cold War authority, Larry Bond. MassTech Engine - The latest version of Massives proprietary engine allows for a full 360° range of camera control, allowing you to get right down into the midst of battle. Demolish Everything - Destroy every object in the game  crush cars, destroy buildings, burn forests! Drop-in Multiplayer - Join on-going games and immediately help your team take control of the map.