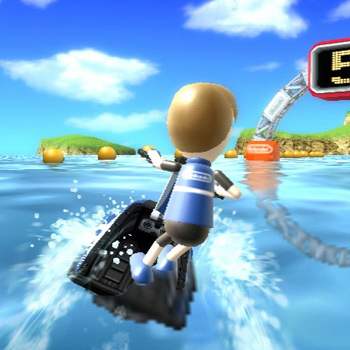 Wii Sports Resort is a collection of fun sports games that anyone can pick up and play. This sequel to the popular Wii Sports makes use of the Wii MotionPlus accessory, which gives players the most responsive and realistic experience possible. The Wii MotionPlus accessory, which is included with Wii Sports Resort, plugs into the base of the Wii Remote controller and, combined with the accelerometer and sensor bar, provides an experience that gives players an even greater sense of immersion. Just as with Wii Sports, people compete against friends and family. As the competition heats up, Wii Sports Resort is as much fun to watch as it is to play. First-time players should find it easy to pick up a Wii Remote and jump into the action. Wii Sports Resort takes place on a tropical island.