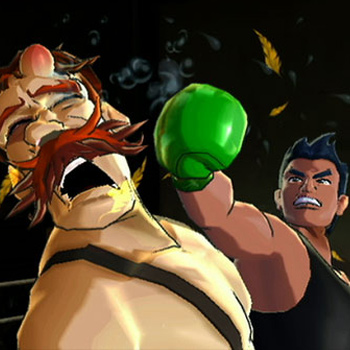 One of the biggest names in boxing returns after a 15-year hiatus. Grab a Wii Remote controller in one hand and a Nunchuk controller in the other and step back into the ring with a modern update of the classic Punch-Out!!

Little Mac is back! Everyones favorite underdog from the 1980s joins the best of the original Punch-Out!! cast in a modern re-imagination of the series. Players will find familiar names like Glass Joe, King Hippo and trainer Doc Louis. These boxers come to life again in cel-shaded 3-D, complete with hilarious fighting animations and back stories that capture all the fun and flair of the original Punch-Out!! games.

The motion-sensitive controls of the Wii console mean that when players throw punches, Little Mac throws punches as well. Additionally, you can control hooks and jabs by combining motion control with control-stick movement.