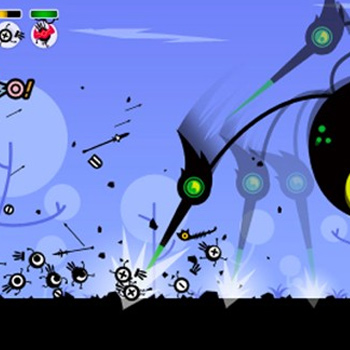 The story of the Patapon tribe marches forth as they hunt for the fabled Earthend. Shipwrecked in a new and strange continent the Patapon are depending on you, their god, to lead them safely through this perilous new land. As you guide the tribe through this new world with your mystical drum, they will come face to face with a new tribe, encounter a mysterious and mighty Hero Patapon and uncover the ruins of Patapolis, a mystical place long spoken of by the Patapon. All-new modes to Patapon 2 include thrilling multiplayer stages, a huge array of missions and deep tutorials that will have you drumming to the beat of the Patapon in no time. Head to patapon-game.com for the captivating mini-game, The Art Of War, where the goal is to collect as many Patapon characters as you can and then immortalise your battle with the Patapon Wallpaper creator. Lead your loyal followers through 60 rhythmic stages. Keep the beat going with tons of hidden items and mini-games to reveal.