Professor Layton and the Diabolical Box 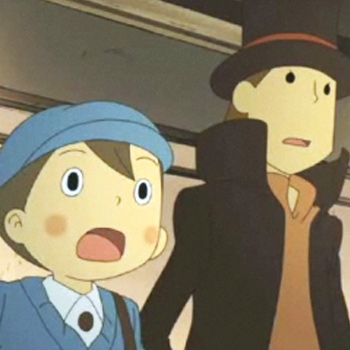 Mild-mannered Professor Layton dusts off his top hat and embarks on a trip to solve over 150 new brainteasers in this follow-up to 2008's hit puzzler. Once again you'll need to complete various math, visual, word, and science puzzles while interacting with a colorful assortment of characters. The underlying mystery involves the perplexing death of Dr. Schrader, Layton's mentor. It is rumored that those who dare open an ancient artifact known as the "Diabolical Box" are cursed to die. Layton, accompanied by his young apprentice Luke, decides to investigate the death of Dr. Schrader and his cryptic connection to the devious device.

Solving each riddle or puzzle will earn you points in the form of picarats, which are used to unlock various bonuses. For those stumped on a particular puzzle, hint coins can be found hidden within the varied locales and used to reveal up to three clues. Fans of the first game's distinctive art style will appreciate the sequel's expanded cut-scenes and voice-over dialogue. Online owners can also download one additional puzzle via wireless connection for 33 consecutive weeks after the game's launch. Known as Professor Layton and Pandora's Box overseas, the Diabolical Box is the second in a planned trilogy of Layton games for Nintendo DS.