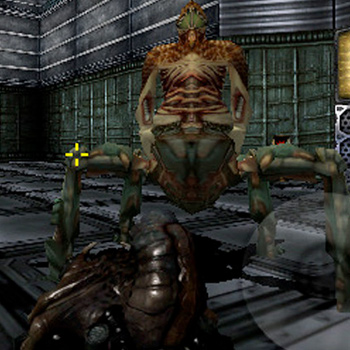 Tuned to run on state-of-the-art wireless hardware, 2007's Prey Mobile is a first-person shooter based on Human Head Studio's unorthodox PC game. Players control Tommy, who makes his way through truly alien game levels as he searches for his missing girlfriend, Jenny. In addition to the selection of powerful ranged weapons he discovers in his explorations, Tommy can use a spirit walk ability if he is killed in combat. While spirit walking, Tommy can battle other ghosts to win more life energy. He also is free of physical limitations, so he can walk through walls and other barriers. Most of the play of the mobile game is devoted to shoot-outs, but Tommy also must solve environment puzzles to make it through the adventure, and some require him to use his spirit walk ability to reach otherwise inaccessible areas.