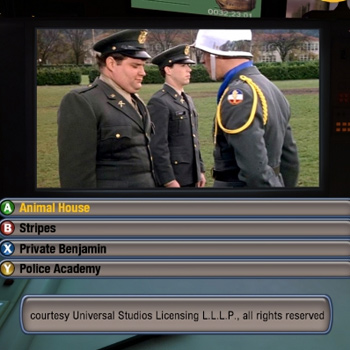 Scene It? Lights, Camera, Action brings friends and family together for a casual movie trivia game that everyone can play and enjoy. Using the simple and intuitive Big Button Pad, challenge your friends to see whose movie knowledge reigns supreme, with real content from your favorite movies and actors. New puzzle challenges: The Xbox 360 game includes more than 1,800 questions not seen before in any other Scene It? game. It features five new types of puzzle challenge that are sure to keep you guessing all night long. Enjoy "Credit Roll," where you guess the film based on the list of characters and actors, "Childs Play," where you guess the name of the film based on a child's drawing of a film scene, and "Quotables," where you are challenged to finish a famous line from a featured film. In addition, all 21 puzzle types have been designed to provide the ultimate multiplayer experience on Xbox 360. Big Button Pad: Scene It? Lights, Camera, Action is shipped with four new wireless Big Button Pads, so each player has his or her own buzzer. Making games such as Scene It? more approachable for all types of players, the Big Button Pad takes its inspiration from the game show buzzers of yesteryear but uses the latest infrared technology to minimize the chances of an argument over who answered first. Hi-def visuals: The game offers a wide assortment of movie clips in HD format, as well as hundreds of stills and audio clips from your favorite films. Minimal repeats: The Xbox 360 version keeps track of questions that have already been asked and minimizes repeats so you rarely get the same question twice.