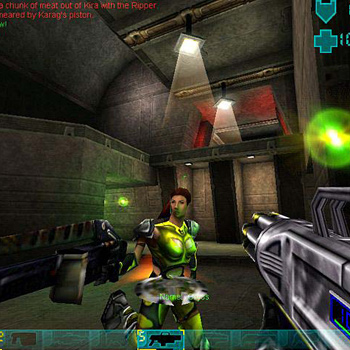 First-person combat has never been bloodier or faster paced than in Unreal Tournament, a game that pits you against computer-generated bots or online opponents in a kill-or-be-killed free-for-all. With weapons upgraded from its predecessor, this game offers scores of options for play. Games range from the simple Deathmatch to team options such as Capture the Flag. As the player, you can go it on your own against the toughest the galaxy has to offer or direct a group of hard cases against a similarly well armed foe. During play you can be fragged (killed) several times, respawning to take up the fight again--though without the rocket launcher or other guns you have carefully stockpiled. Unreal Tournament has some amazing features, most particularly the tournament maps, which are complex, varied, and interesting. Initially a seemingly indecipherable maze loaded with weapons and health boosters, the geography of these spaces begins to make sense as you run from shootout to shootout. After getting fragged a couple of times, smart players will find themselves using these environments to their fullest advantage. Ducking down narrow chutes, for example, to leap out on unsuspecting enemies is very satisfying. The playing fields offer hazards of their own, of course--the danger of falling into toxic slime or hard vacuum is always present. Another nice aspect of the game is that online play runs with very little lag, allowing an intense multiplayer experience.