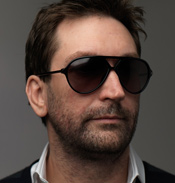 Rockstar Games was founded in 1998 and acquired Rockstar North (formerly DMA Design) in 1999. Together with their extended development, writing and publishing teams, Sam and Dan Houser, along with Leslie Benzies, helped define the path of the entire medium into the cultural mainstream with more than a decades worth of innovative digital entertainment, including the Grand Theft Auto series, one of the most critically acclaimed and commercially successful videogame series of all time.

After the prior release of top-down versions of Grand Theft Auto, the games shift to 3D with the release of 2001s Grand Theft Auto III brought about a sea change in modern videogames, combining a contemporary gangster narrative with a highly detailed, open world that allowed players to explore a richly populated universe and engage in the story at their own pace. The games combination of deep and detailed atmosphere, free-form gameplay and gritty social satire delivered a sense of freedom and place never before seen in videogames and earned multiple awards including Outstanding Achievement in Game Design, and Outstanding Achievement in Game Play Engineering from AIAS.

The critical and commercial success was followed in 2002 by Grand Theft Auto: Vice City, which expanded on the concepts of Grand Theft Auto III in every direction possible, earning multiple Game of the Year awards and for Benzies, Wired Magazines Game Designer of the Year. 2004s Grand Theft Auto: San Andreas managed to yet again exceed fans expectations of the series, achieving multiple awards including AIAS Game of The Year, while becoming the highest selling game on the Playstation 2.

2008s Grand Theft Auto IV brought the series into high definition to rave reviews and remains one of the highest rated games of all time on any platform. Grand Theft Auto IVs critical acclaim was matched by its sales success, earning the Guinness World Record for single day sales of an entertainment product  a record now held by 2013s Grand Theft Auto V. Grand Theft Auto V pushed the series to new heights with a massive and incredibly detailed reimagining of modern-day Southern California, as well as pioneering a new approach to both gameplay and story, allowing players to dip in and out of the lives of three different characters to simultaneously play three sides of the games interwoven story. Once again, the series earned critical acclaim and record breaking sales, generating a stunning $1 billion in revenue in just three days.

As both developers and publishers, Rockstar Games has released a string of groundbreaking games including Manhunt, Bully, L.A. Noire and 2009s Red Dead Redemption, an open world game set in the dying years of the American West, which earned more than 160 Game of the year awards. Presently, Rockstar Games and Rockstar North continue to develop new content for Grand Theft Auto V, Grand Theft Auto Online and future projects.