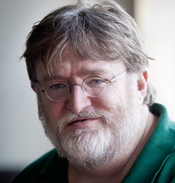 Gabe Newell is the President and co-founder of Valve Corporation, an entertainment software and technology company based in Bellevue, Washington.

Valves portfolio of entertainment has since grown to include Counter-Strike, Day of Defeat, Left 4 Dead, Portal, and Team Fortress®. This portfolio accounts for over 70 million retail units sold worldwide.

In addition to producing best-selling entertainment titles, Valve is a developer of leading-edge technologies, such as the Source game engine and Steam, a broadband platform for the delivery and management of digital content with over 50 million accounts.

Before starting Valve in August 1996, Gabe held a number of positions in the Systems, Applications and Advanced Technology divisions at Microsoft, where he worked for 13 years. His responsibilities included running program management for the first two releases of Windows, starting the company's multimedia division, and leading the company's efforts on the "Information Highway PC."