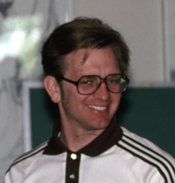 Ataris unofficial motto was all the best games are easy to learn and difficult to master.  Ed Logg made games that exemplified the saying.

Mr. Logg spent much of his early life moving from military base to military base.  By sixth grade, his army stepfather, and mother were divorced.  He and his mother finally settled in a small town East of San Francisco, where he would first experience technology.

Tuesday evenings would find him tinkering at the high schools Computer Club.  Allowed inside the computer room for a couple of hours at a time, Mr. Logg taught himself FORTRAN and assembly language.  He programmed basic games like checkers and chess.  The mainframe was the size of an office desk, he recalls.

Mr. Logg studied computer science and mathematics at University of California Berkley before going to Stanford University for grad school.  He didnt want to become a teacher, which seemed like the obvious path.  I had to do something else.

This lead to a large amount of time spent programming in the Stanford AI Lab, where Mr. Logg encountered his first ever videogame on the universitys PDP equipment.  Spacewar! had been originally conceived at MIT, and was proving very popular at other research centers.  It was absolutely amazing, recalls Mr. Logg.  I didnt know how they did it.

Of course, Mr. Logg wanted to find the answer for himself.  During his first job as a hardware engineer at the Control Data Corporation, Mr. Logg continued to program.  He stayed there for five years, and it was only after a colleague moved across the road to Atari that he finally considered getting paid for his labors.

Mike Albaugh, a programmer at Atari who interviewed Mr. Logg for the job, remembers: I liked that he was used to working on stuff that needed to actually work.

Mr. Logg was hired in Ataris arcade division where he began two major coin-op projects, Dirt Bike and Super Breakout.  He developed both games from concept to the field testing stage, impressing many people in the process.

While Dirt Bike eventually got shelved, Super Breakout was a success for Atari, proving Mr. Albaugh had made the right recommendation on the new hire.  He did not consider criticism of his work to be an attack on him, and did not consider it a personal failure if something didn't work out.

Above all, Mr. Logg wanted to make his games fun.  Friend and colleague Ed Rotberg realizes this might sound obvious, but its not easily accomplished. You are always looking forthe creative spark.  Guys like Ed, and Dave Theurer didn't have just a spark  they were a whole pyrotechnic experience.

It was a year later, in 1979, that Mr. Logg made history for Atari.  He remembers being called into the office of his boss Lyle Rains, who proceeded to discuss a game idea based on a failed videogame where players chased another player around a large indestructible asteroid.  The game, while flawed, offered up some intriguing ideas, spawned from the fact that everybody who had played the game seemed compelled to shoot the asteroid.

Mr. Logg suggested the game be programmed in vector graphics, convinced that the resolution would make a difference to its quality.  The resulting game, Asteroids, took him two weeks to prototype, and neatly embodied Nolan Bushnells famous maxim: all the best games are easy to learn and difficult to master.

Not content to rest on his laurels, Mr. Logg pushed on with new projects. Alongside Dona Bailey, he developed Centipede in 1980, producing another hit for Atari.  It went on to spawn a sequel, Millipede, in 1982.  That was the last game Mr. Logg worked on for Atari, before its consumer division was sold and the coin-op division renamed Atari Games in 1984.

Inspired by his sons love of tabletop gaming, Mr. Logg developed fantasy dungeon-crawler Gauntlet for Atari Games in 1985.  A co-op title, there was initial resistance to the multiplayer aspect.  Marketing came in and said, You cant get four strangers around a game.

But Mr. Logg persevered, and his instincts were proved correct; the game is now a classic. From what I could tell in the years that I watched Ed work  it wasn't virtuoso coding that made the games a success as much as putting all the proper features in the game in the right order, says Mark Cerny, a friend and colleague of Mr. Loggs at Atari Games.  Of course, you needed an amazing intuition as to which were the proper features.

It was this intuition that helped Mr. Logg produce a further string of coin-op successes for Atari Games from the mid-to-late eighties. But times were changing, and by the early nineties it became clear that home consoles were replacing arcade machines in popularity.  After an eighteen-month stint at Electronic Arts spanning 1993 and 1994, Mr. Logg came back to Atari Games where he focused on making consumer games, initially porting coin-op title Wayne Gretzkys 3D Hockey for the Nintendo 64.

Bill Hindorff, an executive in charge of production, recalls Mr. Loggs perfectionism which elevated Wayne Gretzkys 3D Hockey from a good port to a great one.  One of the very first things he did was to put the video output of the Nintendo 64 on a scope, to see if the colors were balanced.  He found out that the reds were much more pronounced.  So we had the artists tweak the graphics accordingly.

Mr. Logg continued working on consumer titles for Atari Games until Midway Games closed down his division in 2004.  Mr. Hindorff believes the games he created during this time reflect what ultimately drives him.  He won't rest until his game is fun.

Today, Mr. Logg continues to program games that are fun, currently making elegant games for set-top boxes.  You always want to create one of those games where people look at it and say, it looks fun, it looks easy, Mr. Logg explains.  And no matter what the outcome, they know they can do better.