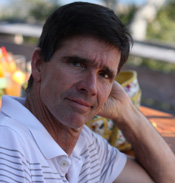 Bill was a graduate student at the University of California at Berkeley when he bought his first personal computer, an Apple II. Inspired by a Pong game at a local restaurant, he began writing simple arcade games for the Apple. He traded his first games to Apple Computer in exchange for a printer, but as the market grew, he soon was selling thousands of copies of his games through computer stores. While an employee at Apple Computer in 1981, Bill became friends with some serious pinball players which led him to write Raster Blaster, at the time the most elaborate and realistic pinball simulation on a personal computer.

Bill enjoyed building games, and early on was interested in writing programs that allowed the user to build games. Taking some of his early game code, he programmed the 3-D Game Tool, which allowed non-programmers to create simple 3D games and applications. After writing Raster Blaster, and inspired by the graphical user interface work at Xerox PARC and at Apple, Bill wrote Pinball Construction Set, a program that allowed users to create and play their own video pinball games. The game included editors to define boundaries, place bumpers, targets, and other parts, paint a background, score simple sounds, and define scoring logic using simple circuits. PCS was one of Electronic Arts inaugural titles, is an inductee in GameSpys Hall of Fame, and won a technical Emmy award in 2008.

Bill has continued his work to make computers interesting creative tools, working on games and game building tools at Apple, Electronic Arts, The 3DO Company, Sony Computer Entertainment, and Google.