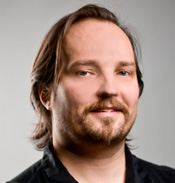 Dr. Greg Zeschuk has been in the game industry for over 15 years, exclusively at BioWare, the award-winning development studio headquartered in Edmonton, Alberta, Canada.  After co-founding the studio with Dr. Ray Muzyka in 1995, the two operated BioWare successfully for 10 years before it was purchased by Elevation Partners, a Silicon Valley private equity firm.

In 2008, BioWare was purchased by Electronic Arts, and at that time Zeschuk was named a Vice President of EA.  In June 2010, Zeschuk was named General Manager of BioWare Austin, where he is overseeing the development of the highly anticipated massively multiplayer online role-playing game Star Wars: The Old Republic.

Prior to his current position, Zeschuk was the Group Creative Officer for the BioWare Group, responsible for BioWare studios in Edmonton, Austin, Montreal, Galway, Ireland and BioWare Mythic based in Fairfax, Virginia.

In addition to being a retired physician, Zeschuk completed his executive MBA program at the Queens School of Business and serves as a Director and Co-Chairman of CodeBaby Corp. (www.codebaby.com), a software company developing a next generation interface for digital media and the Internet, and as a Director of Zeroes 2 Heroes (www.zeroes2heroes.com), a digital comic publisher and internet media company.

More information on BioWare and its products is available at www.bioware.com.