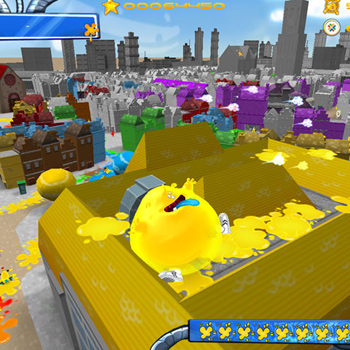 As de Blob, the player uses the city as a playground by rolling and bouncing through the streets crushing as many Leech Bots as possible. The Leech Bots are the machines/creatures that extract color from the city and carry this "liquid color" inside them. To restore color to the city de Blob crushes the Leech Bots, absorbs the pigment they carry, and uses the pigment/paint to color everything it touches. de Blob is forced to take on the evil INKT Corporation agents who want the world devoid of color because "color is a crime!" Constantly under attack, the Blob in his own quirky way fights back. Rolling, bouncing and crushing are his weapons. The object is to color and/or stencil as many buildings in the city as possible while avoiding the enemy. Race against time moving at Blob speed, or choose your own pace. The city is a canvas and de Blob is your paint brush! Vast cityscapes and urban sprawl offers players the freedom to explore and make their own game-experience. Complete levels as a fun, animated superhero who transforms a hostile city into a vibrant, colorful, happy place. Creative activities and puzzles give immediate and continuous rewards throughout the entire city. Multiple challenges must be found and accepted, which can guide the player through to the next level  the destination and objective for one challenge can be the starting point of the next. Successful completion of challenges earns rewards such as points, time, environmental improvements, additional challenges, and liberating zones. An intricate single player campaign, as well as a multiplayer experience that supports two to four competitors via split screen. Sprint challenges  short bursts of gameplay where the player attempts to accomplish a single skill-based objective. Replay sprint levels to earn higher achievement ratings, which enable the gamer to unlock additional content from the Art Gallery. [THQ]