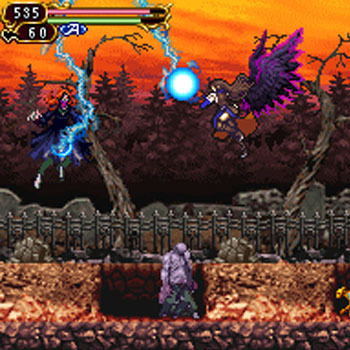 Gamers join a group of vampire hunters and once again track down the evil forces of Dracula in this third DS installment of Konami's long-running Castlevania series. Castlevania: Order of Ecclesia features a new "Glyph" attack system that allows players to simultaneously use multiple abilities and attacks when battling evil though 20 levels of side-scrolling action. The game also features a number of side quests and outdoor areas, and a variety of different endings reward gamers for playing though more than once. Players using a Wi-Fi connection can compete head-to-head with a friend, sell and buy any items they have collected, and connect to the Wii game Castlevania: Judgment for special unlockable items.