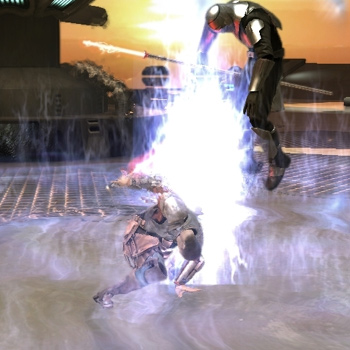 Star Wars: The Force Unleashed casts players as Darth Vader's "Secret Apprentice" and promises to unveil new revelations about the Star Wars galaxy. The expansive story, created under direction from George Lucas, is set during the largely unexplored era between "Star Wars: Episode III Revenge of the Sith" and "Star Wars: Episode IV A New Hope." In it, players assist the iconic villain in his quest to rid the universe of Jedi - and face decisions that could change the course of their destiny. Unleash and upgrade the Secret Apprentice's four core Force powers - Force push, grip, repulse and lightning - throughout the course of the game, and combine them for ultra-destructive, never-before-seen combos. The Secret Apprentice doesn't just Force push enemies into walls - he Force pushes enemies through walls. The Secret Apprentice doesn't just Force grip foes to throw them aside - he Force grips them in midair, zapping them with lightning, then dropping them to the ground to explode like a bomb. In addition to new adversaries created just for the game, such as fugitive Jedi and Force-sensitive Felucians, players also confront and associate with familiar faces from the Star Wars films, including Darth Vader. Visit locations such as Episode III's Wookiee homeworld Kashyyyk and the floral Felucia, the junk planet Raxus Prime, plus an Imperial TIE fighter construction facility. Decisions made by players throughout the game determine the path of the story, including multiple endings that will rock Star Wars continuity as they know it. [LucasArts]