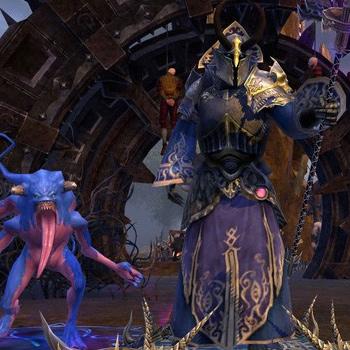 It is a desperate time for the Emperor. A terrible Chaos Plague defiles his lands, ravaging the populace and weakening his armies. Meanwhile, the Dwarf holds in the nearby World's Edge Mountains have come under siege by a massive greenskin horde. Honor-bound by an ancient oath, the ruler of the greatest nation of men in the Old World has dispatched several regiments to assist the embattled Dwarfs, further depleting the Empire's already thin defenses. In this dark hour, a new threat appears. Under a sky darkened by a crimson eclipse, a great warhost erupts from the wastelands of the north. Bearing the banner of Tzeentch, Changer of the Ways, the army of Chaos marches south for the borders of the Empire, crushing everything in its path. With the Dwarfs fighting desperately to slow the ferocious greenskin "Waaagh!", the Emperor realizes that his only hope of defeating the encroaching legions of Chaos lies with the High Elves of Ulthuan. Upon receiving the Emperor's dire plea for help, Finubar, Phoenix King of the High Elves, sets sail at the head of a mighty fleet of warships laden with battalions of High Elf warriors.