Where in Time is Carmen SanDiego? 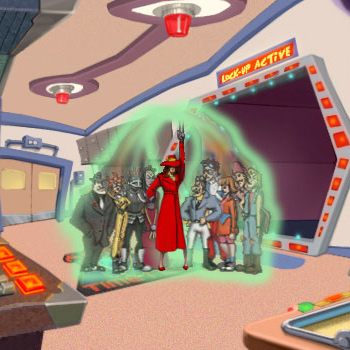 This version is a multiplatform video game where players have to travel through time to collect the clue and the warrant necessary to capture Carmen Sandiego or one of her henchmen. Where in Time Is Carmen Sandiego, a game show which was formerly broadcast on PBS, was loosely based on this game.

The goal of this game is to track Carmen's villains through history and arrest them and ultimately arrest Carmen herself. Similar to the original Where in the World is Carmen Sandiego?, the player has to use the clues given to them on where the crook went to, and physical attributes or interests of the crook in order to secure an arrest warrant.