The Journeyman Project 3: Legacy of Time 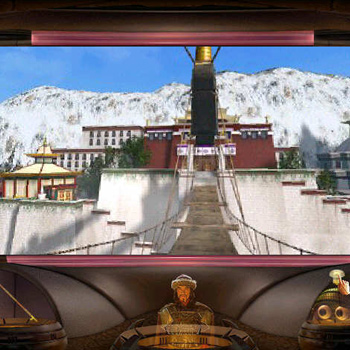 The third installment of the The Journeyman Project adventure game series, this time utilizing a 1st person perspective with a panoramic view you can rotate in 360 degrees freely. The game casts the player as Gage Blackwood, Agent 5 of the Temporal Security Agency, who must travel back in time visiting Atlantis, El Doraldo and Shangri La. In this journey you must try to capture a rogue TSA agent, Agent 3, and collect several mysterious artifacts left by an ancient alien race to protect Earth from an alien invasion and save time and reality itself.

New to the third game is the Chameleon Suit. No longer must the player avoid being seen while traveling through the past, as they can now disguise themselves as any person they have seen. People in the past can be spoken to as well, and their reactions vary based on who Gage is disguised as. Puzzles often need to be solved by bringing in items from another time period, or by talking to a character to learn more about the mythical societies.