Realms of the Haunting 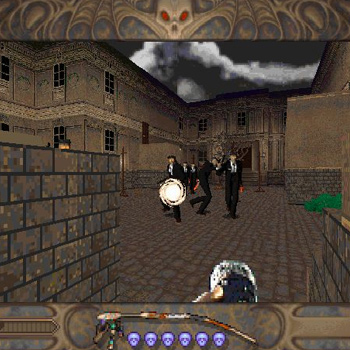 Realms of the Haunting is a very interesting combination of first-person shooter and three-dimensional adventure game with quite a bit of live-action Full Motion Video thrown in to boot. Navigation through the game world is done through a FPS interface very similar to Doom, however there's also a free-floating cursor controlled by the mouse which you can use to interact with the various objects around you.There's also an inventory system and quite a few object related puzzles. The game has standard Doom-ish combat against a variety of monsters, however the combat is placed at intervals rather than throughout the game, and the emphasis is more on exploration and atmosphere.

Realm's of the Haunting's plot starts out as a typical haunted house story but soon mutates into an end-of-the-world tale combining New Age pseudo-philosophy and biblical Revelations. You take the part of Adam Randall, a pastor's son who is sent to investigate a haunted mansion by a mysterious priest who claims it's linked to your father's death. Once you enter the mansion you soon learn that not only is it infested with demons and evil spirits, but that the mansion itself is built over an old Satanic temple and the priest who sent you there is in fact a five-hundred year old French sorceror trying to bring about the end of the world.You are soon joined by a helpful young psychic and aided by the ghost of a defeated knight. You'll also start a grudge with an ex-demonking as well as be chased around by the Antichrist-in-training. Instead of plain English, all these characters are compelled to speak in cryptic pseudo-mystical mumbo-jumbo, but even so they somehow seem to get across the point that you're some kind of Chosen One who's supposed to sort out the whole sorry mess. Things gets even more surreal as you travel to different realms of existence via gateways located in the mansion, chat with a variety of supernatural entities via FMV sequences, learn the real secret behind life the universe and everything, and of course do your darndest to stop or at least delay Armaggedon.