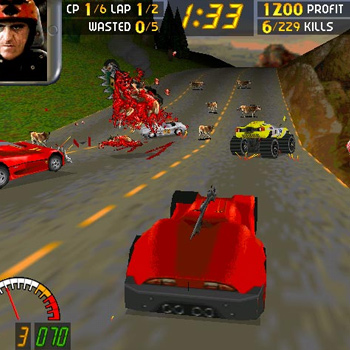 In Carmageddon, the player races a vehicle against a number of other computer controlled competitors in various settings, including city, mine and industrial areas. The player has a certain amount of time to complete each race, but more time may be gained by collecting bonuses, damaging the competitors' cars or by running over pedestrians.

Races are completed by either completing the course as one would a normal racing game, "wasting" (wrecking) all other race cars, or killing all pedestrians on the level.

The game was notable for its realistic and ground-breaking physics and for its in-game movie making features. It was also one of the earliest examples of sandbox 3D driving games, and may have influenced other later games including Driver and the Grand Theft Auto series.

The game featured instrumental versions of songs from Fear Factory's album Demanufacture, with 'Zero Signal' being used in the opening theme.