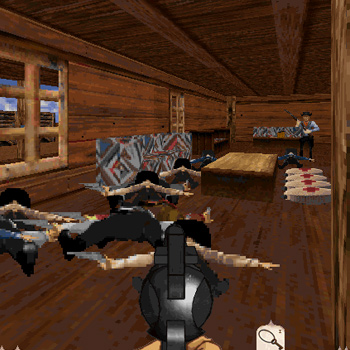 Marshall James Anderson had been a great gunfighter. He had worn the badge of the law and put men to death or to jail. But a Marshall can only travel alone so long. And so James Anderson retired; he got himself a wife, got himself some land, got himself a daughter and dedicated himself to the peaceful life of a home on the range.

The Gentleman, Bob Graham, has other plans for James Anderson's plot of land however. It sits right along some prime real estate for where the railroad is going to go, and whomever could own that land might be able to get rich setting up a town. So Bob, he's hired himself up some of the roughest and toughest ruffians west of the Mississippi to try and "persuade" Anderson and the other land-owners to sell or abandon their lands.

James Anderson returns home from town one day to find his homestead aflame, his wife killed and his young'in abducted by the badguys. Not willing to trust in the fates, Anderson dusts off his six-shooter, digs up his buried shotgun and dons his old tin star. He's about to follow the trail of these men across deserts and valleys... until he finds his daughter.

Outlaws is a first-person shooter with an "old west" theme and hand-drawn graphics. James will come across his share of guns, landscapes and saloons in his adventure and will certainly fill a whole bunch of bad guys with holes.