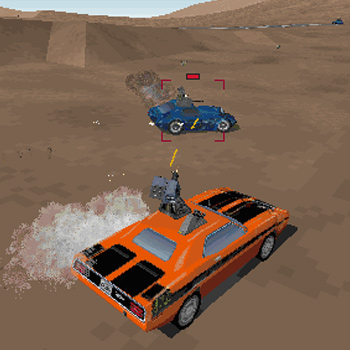 In a dark alternate vision of 1976, the Federal U.S. Government has faltered and the world suffers from the effects of an oil crisis. Armed gangs terrorize the roads of the American South West. You are Groove Champion - when your sister Jade is killed you inherit her custom-built Picard Piranha and become a vigilante, with only revenge on your mind.

Interstate '76 is a vehicular combat game with a 1970s theme which means muscle cars & funky disco music. Hit the road and seek the killer of Groove's sister in 17 scripted missions across open-ended trackless areas, or battle creepers in the instant melee mode, against up to 7 other human players. The player can equip their car with different weapons, like machine guns, turrets, grenade launchers and mines. Although the game world is not intended to be realistic, the car handling and collision physics are.