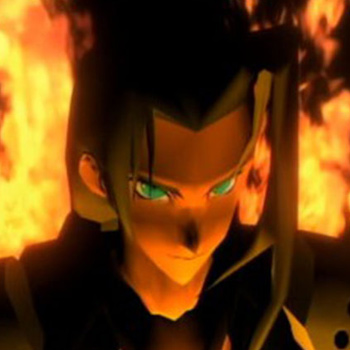 The seventh installment of Final Fantasy series takes place in a post-modern, sci-fi world where high technology reigns and where robots and bio-engineered mutants co-exist with goblins and dragons.

The story focuses on Shinra Inc., an evil mega-corporation responsible for all the world's high technology. Shinra supports this technology with Mako energy, Shinra's patented source of power. Unfortunately Mako is the lifeblood of the living planet and by using it up Shinra is slowly upseting the balance of nature.

In comes Avalanche, a rebel group of disenfrancised citizens who have taken it upon themselves to oppose Shinra's ambitions. The main character is an ex-Shinra soldier named Cloud Strife, a man with a complex history that's explained as the game goes on. Cloud joins up with Avalanche as a mercenary for hire, and together they take on Shinra's maniacal executives and their army of shocks troops, robots, and mutants. However after a while it becomes apparent that there are other forces at work, and ultimately Cloud must not only fight against Shinra, but also stop a powerful terrorist from destroying the world