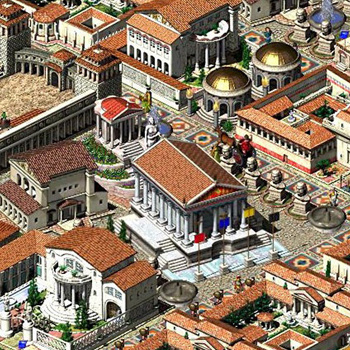 Caesar III is a city building game, in which you place building and lay out zones. You are in charge of a small province, and hope to make it as peaceful and prosperous as possible, following the advice of your citizens to make it work. The game also features defending your city, by forming an army. and for trade, but you never leave your city. You must pay attention to the Gods, who can inflict disasters if not satisfied. As the game progresses, new technologies become available, which you must allow for.

It is about people and systems. Each building that you build requires you to hire people; people that you see walking the streets of your town. The marketplace needs saleswomen, and buyers. You see the buyers walk to your granary to buy food, which they then bring back to granary. The sales lady walks up the street selling food to the houses she finds, which allows them to evolve to better housing, which pay higher taxes. The people in this game make the difference. Instead of a police station having a radius of effectiveness, it sends out a police officer who can only fight crime and fires he sees. The need to rely on randomly walking citizens, means placement of buildings is as significant as in Serf City/The Settlers.