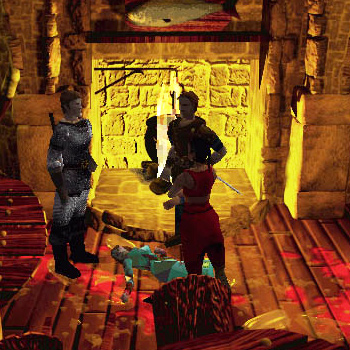 Return to Krondor is a computer role-playing game set in Raymond Feist's fictional fantasy setting of Midkemia. A sequel to 1993's Betrayal at Krondor, it was released for Windows 95 on the PC in time for the 1998 Christmas season. Within the game, the player commands a group of heroes with different attributes, strengths, and weaknesses which the player may upgrade over the course of the game.

Starting in the city of Krondor and eventually venturing out into other specific parts of the Midkemia world, the game focuses on battling humans and evil creatures of various kinds. Although the story is very linear in nature, the game offers a range of possibilities while the player is adventuring in Krondor. While the computer graphics of the game is now visually outdated by games like the plotwise very similar Baldur's Gate: Dark Alliance II, the game featured some unique or rarely seen features at the time of release, including elaborate alchemy and thieving. Using alchemical equipment, it is possible to brew custom potions from a variety of ingredients. In order to open locked or trapped chests and doors, a simulation of the process of disarming and lockpicking is initiated. Facing a variety of different mechanisms, it is necessary to pick the right lockpicking tools and then use them with care, simulated by carefully timed mouse clicking.