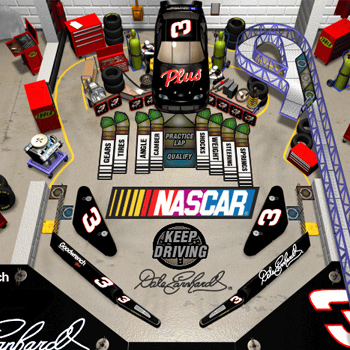 3-D Ultra NASCAR Pinball is, as the name suggests, a pinball game with a racing theme. Unique is that the theme is not only present on the table's background images but that the player actually takes the role of one of four real-life NASCAR drivers. Every race consists of three parts, each represented by one table: preparing, racing and pit stops.

The player prepares his car by playing at the garage table. Similar to regular pinball games the goal is to score as most points as possible. The player visits the speedway table two times per race: at first there is a qualifying round which, together with the garage score, sets the starting position for the race. During the race the player constantly competes against the other drivers; to be successful he needs to score points by hitting certain parts of the table as fast as possible. Lastly the pit stop table is entered by hitting a certain point on the speedway table. This is required if the player hits the "accident" spot or at certain times during the race. Again the goal is to hit certain points on the table as fast as possible.

The game also includes an informational part on the CD-ROM where the player can read texts or watch videos about NASCAR racing.