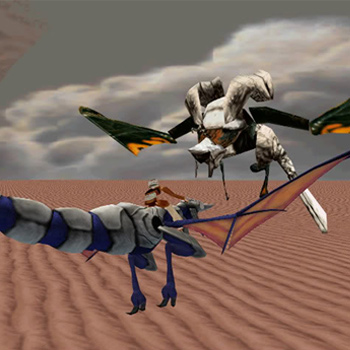 Panzer Dragoon Saga is set in the same universe as the other Panzer Dragoon games, but it differs from the rest of the series by having strong RPG elements.

The hero of the game is Edge, one of the soldiers of the mighty Empire. The Empire has recently ordered some excavations at ancient ruins, trying to discover the secret of an old technology that is much superior to that of present time. During the excavation works, Edge encounters a mysterious young girl. He then witnesses the murder of his captain and other soldiers by Crayden, one of the Empire's officers. Coming into contact with an ancient dragon, Edge begins to roam the world, determined to find Crayden and to avenge the death of his comrades. Nobody helps him but his faithful dragon. But the Empire is also after Crayden, so there appear to be at least three sides in the conflict... or are there more?

"Panzer Dragon Saga" combines elements of shooter and role-playing. You don't have a party in the game: you control only Edge on his dragon, who is in fact the playable character in battles. You move around through the game's fully 3D world by flying on the dragon. In towns and some dungeons you also move on foot. During battles, you can shoot with Edge's gun, or use one of the many special attacks of your dragons. You shoot in real time, and can also move around to attack your enemies from the sides of from the back, or to avoid their attacks. The dragon gets experience points for fighting and also gains levels. You will be able to customize your dragon by assigning to him one of the four available dragon classes, that will determine his attack power, speed, etc.