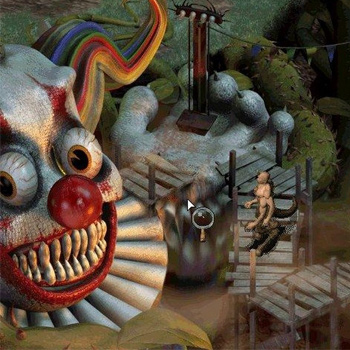 Sanitarium is a point-and-click adventure game, best described as a psychological thriller. The player is cast as Max Laughton, a man who wakes up in a bizarre asylum, suffering from amnesia due to a car accident. He will have to find out who he is, and what he is doing there.

The game world is divided into five different levels, each having its own atmosphere, and it's not always clear if something is happening on the grounds of the sanitarium or in the delusional mind of the protagonist. Both movement of Max and picking up items are done with the mouse. Puzzles are mostly inventory-related, with a few machine and lever puzzles. There are also a few action sequences, but even when the player dies, the game can be continued without any penalty. Talking to various NPCs will teach the player about their bizarre surroundings.