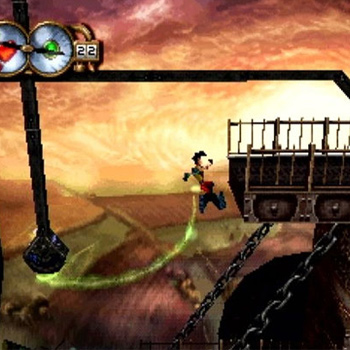 Wild 9 (known as Wildroid 9 in Japan) is a video game developed by Shiny Entertainment for the Sony PlayStation, with a Sega Saturn version also planned but never released. Its gameplay is that of a 2D platformer (with occasional breaks in dimension). The core gameplay revolves around the player character using what is called a "RIG", a sort of electronic lasso, to capture objects and enemies. Objects can be moved to where they are needed, and enemies can be destroyed by using the RIG to smash them on the ground or into environmental dangers. There are also freefall stages (where you try to avoid obstacles while falling) and racing stages (where you chase a boss and try to defeat him while avoiding obstacles).