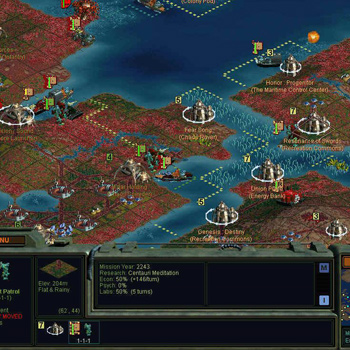 Alpha Centauri employs the same basic game play, rules, and concept as Civilization 2, but features enhanced diplomacy and a new, slicker interface. Players begin by assuming leadership of one of seven colony factions, establishing a base on the unexplored world. Conquering territory, developing technology, expanding the faction's population, and dealing with native life forms are critical priorities that must be correctly balanced for survival. If a faction's military output is low, it may be vulnerable to attacks by others or by dangerous mind worms that roam the landscape. On the other hand, building war machines at the expense of scientific research may result in trying to manage a massive but obsolete war machine or a rebellious population.

Within the game, you can now automate tasks that--in the earlier game--were repetitive and dull. The factions also have a better mix of leaders; three of the seven factions are headed by women. The computer AI for the other groups does a good job of making decisions in accordance with each faction's particular philosophy and world view, and will often surprise a human player with an offer of strategic alliance or a sudden double-cross.

Alien Crossfire, the official add-on pack for Alpha Centauri, expands on the original game by adding seven factions, new facilities, additional secret projects, and new branches to the elaborate technology tree. The pack also provides new enhancements to Alpha Centauri, including play-by-e-mail multiplayer mode, hot-seat multiplayer mode, and numerous tweaks to the interface and unit properties. Alien Crossfire's new factions include cyborgs, drones, pirates, and two sets of alien societies. Factions are balanced by a set of predetermined statistics and characteristics, such as bonuses for particular government and production styles.

This easy-to-learn and thoroughly absorbing game takes the best features of the classic Civilization 2 and sets them in a brave new world. The addition of Alien Crossfire's expanded features, missions, and multiplayer capabilities ensures that players will be exploring the fascinating world of Alpha Centauri for a long time.