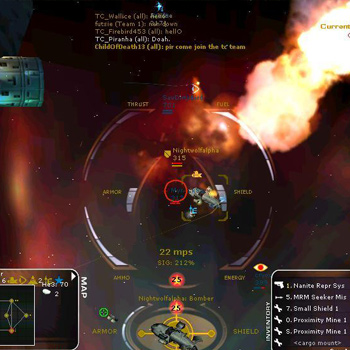 Intense Multiplayer Action
Jump in immediately and enter battle with dozens of players, sneak stealthily into enemy space, bomb research stations, escort friendly ships or explore uncharted sectors. The only leveling you'll ever need is learning to outsmart your rivals.

Pioneer Game System
Originally designed and developed by Microsoft and released in 1999 way ahead of its time, Allegiance is still one of the most seamless integrations of Real Time Strategy and First Person Space Combat ever. Its huge diversity suits a wide spectrum of skills and provides endless challenges for new and experienced players.

Deep Gameplay
Tired of skill grinding and locked choices? Allegiance lets you pick your role on the fly, perform all kinds of tasks, organize large scale manoeuvers and enter epic battles in every 30m-to-3h match. From the nimble scout to the devastating capital ship, all roles can change the outcome of the game.

A Strong Community
Discover the game that has hooked thousands of players for more than ten years. Try the training programs, download the latest mods and upgrades, join the weekly Squad League or participate in massive special events. This is the best game you have never played... until now.