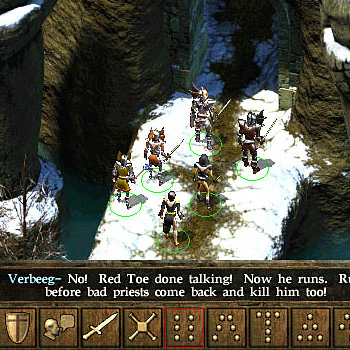 Icewind Dale (2000) is a computer role-playing game developed for Windows by Black Isle Studios and published by Interplay Entertainment. It takes place in the Dungeons & Dragons Forgotten Realms campaign setting, and is based on the Advanced Dungeons & Dragons 2nd edition ruleset.

The player begins the game by creating an adventuring party, which becomes enlisted as a caravan guard in the wake of strange events. As the story progresses, the player learns of a demonic feud that threatens the Ten Towns of Icewind Dale. In this hack-n-slash cRPG you play a combat oriented Baldurs Gate  the graphics, the system, and the interface are just the same. The only real difference between the two is there is a lot more enemies to kill and much fewer NPCs to talk to.