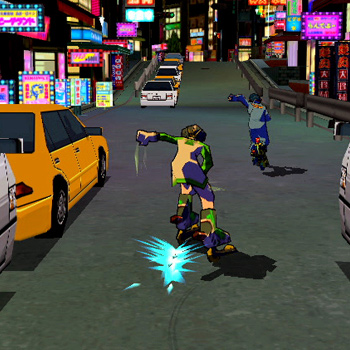 The game begins in Shibuya-cho, and is introduced by Professor K, the DJ of a pirate radio station based in Tokyo-to, who explains the basics of life in Tokyo-to for a "rudie", the term he uses to refer to young people who roam the streets spraying and skating, as a means of self expression.

The city is split into three partsShibuya-cho, Benten-cho, and Kogane-cho, each of which corresponds to a different time of day. Shibuya is a shopping district full of blue skies and daylight, Benten a nocturnal entertainment spot that represents night, and Kogane a mostly residential area, built on the water, where it is perpetually sunset. In each of these areas the player will encounter a rival gang - the Love Shockers in Shibuya, the Noise Tanks in Benten, and Poison Jam in Kogane - that attempts to usurp the GG's home turf. The player starts off forming a skate gang which also resides in Shibuya-cho, and thus forms a rivalry between the gangs in the area. After completing a set of menial challenges, designed to introduce the player to the control system, Gum and Tab join the gang forming the first 3 members of the GG's. The player starts out as Beat, a 17-year-old rudie who ran away from home like many other Japanese rudies. Beat was first shunned from gang to gang over and over again until he decided to start his own gang. Beat is the leader and founder of the GG's. The player first starts out spraying a little graffiti in Shibuya-Cho looking to recruit members. First Gum joins, then Tab.

The initial stage is set in a Shibuya bus station, in which the player has to "tag" various parts of the bus station, as well as spray over existing tags, so as to gain the area as part of their territory. While tagging these places, the player is pursued by policemen and their leader, Captain Onishima. The police, the S.W.A.T team, and Goji Rokkaku's Golden Rhinos are yet another obstacle to avoid while defeating rival gangs. Also, Professor K narrates specific parts of the game via his eponymous pirate radio station called Jet Set Radio.

Other gangs which feature in the game as opponents are the Noise Tanks, who appear to be semi-cyborg otaku, Poison Jam, brutish thugs who wear fish costumes, and the Love Shockers, an all-girl gang made up of jilted lovers. Once the protagonist defeats each gang they hand over their belongings and grant the area to the graffiti gang that dethroned them.