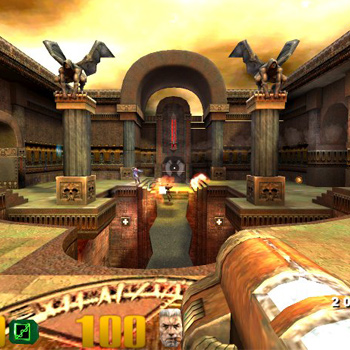 Quake III Arena is a first person shooter game. However, unlike in other first person shooter games, instead of taking on a series of levels, such as with Doom, Quake gives players a number of battle arenas where they can duke it out with either their friends and computer generated opponents (called gladiators) or just the AI opponents. Or, players can take the game to the internet and take on flesh and blood opponents through the Arena servers.

A large number of maps (called Arenas) are available, from small ones than can accomodate about 5 opponents before it gets too crowded, up to impossibly huge maps that can keep almost 50 players busy and working for every advantage.

The object of the game is to kill as many opponents as possible while avoiding getting killed (known as fragged) yourself. To accomplish this end, players have a variety of weapons, from the low end machine gun and gauntlet that every player starts out with, to the aptly named BFG (Big _ing Gun), Rail Gun or Lightning Gun that can devastate your fellow gladiators with ease, Three kinds of Armor (shards, yellow and red, each providing increasing amounts of protection), health patches, and power ups.