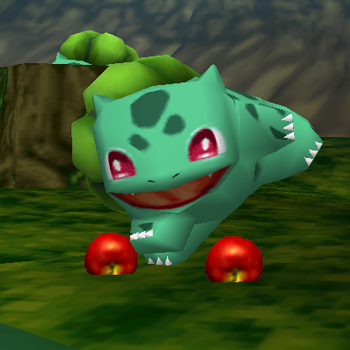 As Pokémon Snap is the first in a planned series of Nintendo 64 titles based on the popular Pokémon franchise. Your goal in this first-person adventure is to take pictures of as many species of Pokémon as you can from on board the "Zero-One" motorcar. The island is divided into multiple courses, each becoming accessible after you earn a specific number of points from well-composed snapshots.

As the lone member of Professor Oak's research team, your first assignment is to board the professor's motorcar. This yellow buggy automatically follows a trail along the beach, where you'll begin taking photos of the island's inhabitants. Once you learn the basics, Professor Oak will give you Pokémon Food, Pester Balls, and a Poké Flute to help you obtain better shots. Since the Pokémon all behave differently, these items can help coax shy creatures into coming closer to the camera or awaken certain monsters from their slumber.

Players can take up to 60 pictures on an island course, but only one picture of each species is kept after evaluation. The game automatically saves all accepted entries in the "PKMN Research Report" for viewing at a later time. Each picture will be graded on size, pose, and technique, with bonuses awarded for multiple Pokémon in a picture.