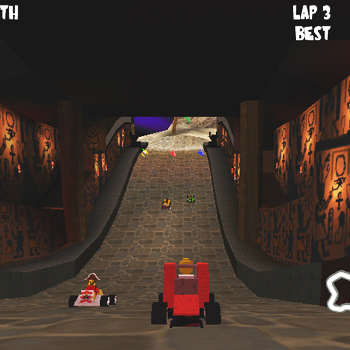 As the first LEGO product for the PlayStation game console, LEGO Racers combines the creativity and imagination of virtual LEGO brick construction with a high-speed racing game. Published by LEGO Media International Inc. and developed by High Voltage Software Inc., the game is the first LEGO Media software title to be available on the PlayStation, Nintendo 64 and the PC.

Players can customize their own LEGO race cars using authentic, virtual LEGO bricks from the LEGO Garage. Once the car is built, players can challenge another player or up to five other popular LEGO characters on 12 tracks based on the following LEGO toy play themes: Space, Pirates, Adventurers and Castle. A unique system of power-ups provides players with numerous ways to gain the upper hand, as do hidden shortcuts and secret pathways on each track.