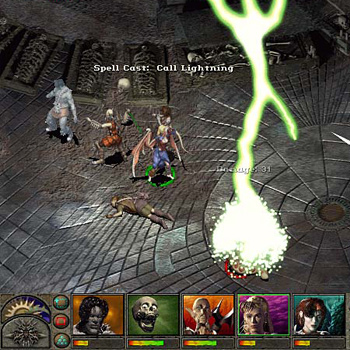 Torment is a single-player, isometric RPG, the first game set in the Advanced Dungeons & Dragons universe of Planescape. The game is developed by Black Isle Studios, the same team behind the critically acclaimed Fallout series and the award winning Baldur's Gate. Coincidentally, Torment uses BioWare's Infinity Engine (the same used for Baldur's Gate), albeit with a view much closer to the character.

In the true tradition of many role-playing games, your character has attributes that can increase through experience: strength, constitution, dexterity, intelligence, charisma and wisdom. Armor class, hit points, encumbrances, inventory management, spell casting and alignment are but some of the other aspects of character development. The Nameless One can switch class by talking to characters within the game: priest, mage, thief and fighter. You must build experience in all classes in order to get the fullest benefit of the attributes of each.