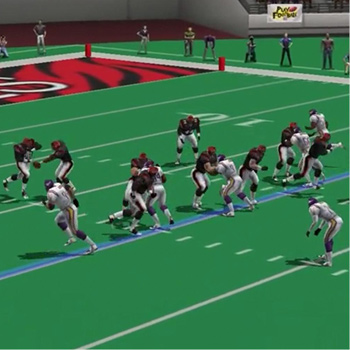 NFL 2K utilizes a view from behind the quarterback as the default perspective, but players are free to choose between seven other camera angles to customize how the action unfolds: close, far, isometric, cinematic, side, top view, or blimp. Regardless of which angle you choose, you'll never have to switch to another screen to call a formation or play; play calling is performed on the same screen as the actual game. In addition, each formation and play will be diagramed right on the field so you can tell precisely where each player is supposed to be once the ball is snapped.

The title includes 31 NFL teams along with accurately modeled players with ratings based on the 1998 season. An additional nine teams have also found their way onto the disc, including three all-pro squads and six alumni teams. The four different game modes consist of Season, Practice, Tourney, and Playoffs. Like the NFL, each season consists of 16 games as you attempt to take your team all the way to the Super Bowl.