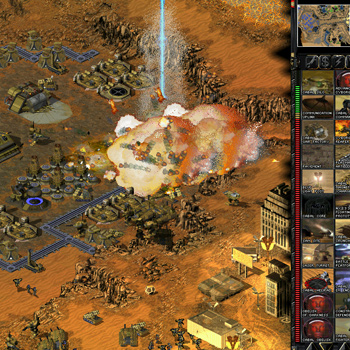 Tiberian Sun features three factions (each with its unique strengths and tactics), the Global Defense Initiative (GDI), the Brotherhood of Nod (Nod), and The Forgotten (non-playable, neutral faction of mutants who have been physically and mentally affected by the Tiberium). The storyline follows the continuing struggle between the GDI and Nod, the latter of which is ready to launch a new set of surprise sneak attacks in an attempt to wipe the Global Defense Initiative off the face of the Earth.

The plot is a follow up to the original game Command & Conquer, after the end of which the Nod leader Kane is presumed dead. In Tiberian Sun, Kane resurfaces from his hideout with improved military forces and new Tiberium-enhanced technologies, determined to rule the world at all cost. The GDI commander Michael McNeil is tasked with objectives to prevent the world from falling into the hands of Nod, this time with the very means of the extraterrestrial Tiberium substance.