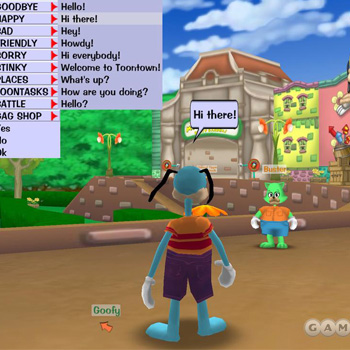 Disneys Toontown Online is the first massively multiplayer 3D online game created for kids of all ages. Toontown is built on the principles of traditional Role Playing Games (RPGs) and Massively Multiplayer Games (MMPs). Its game play, however, has been expanded and modified to appeal to casual gamers and through several years of testing, Toontown has developed a core fan base among the gaming community. A non-violent game alternative, Toontown Online is a fun filled, ever changing online Toon world where players become Toons and join together to save the world from the evil Cogs. Toontown is under siege from an evil band of business robots called the Cogs. An unsuspecting Scrooge McDuck accidentally unleashed the money-hungry robots on the Town and they are attempting to turn the colorful world of Toontown into a black and white metropolis of skyscrapers and businesses. The player's job, as a Toon, is to help stop the Cogs and rescue the town.