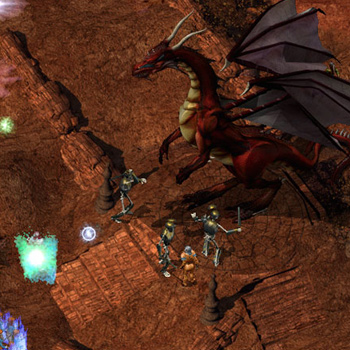 Your journeys have taken you far. From your humble beginnings as a youth in the security of Candlekeep, to the depths of slaved-worked mines, to the cloak-and-dagger politics of Baldur's Gate, to your final confrontation with your brother Sarevok. You have been as far down as the capital city of Amn and had to deal with the depraved obsessions of the madman Jon Irenicus and an army of the undead. You have seen the death of friends, gained new companions, met lovers, and dealt with the death of the only father you have ever know. You have been forced to come to grips with the fact that you are a son of the murder god, Bhaal. After much hardship and toil it has come down to this. It all ends here in Tethyr. War is waging and as the Bhaal-spawn battle for dominance, you stand in the center of the struggle. It is time to end your questing and get the answers you have sought for so very long.

Baldur's Gate II: The Throne of Bhaal is the final chapter in an epic saga of games following the adventures of your character through the Forgotten Realms universe. You will encounter new characters, new lands, new items, quests, monsters, and the answers you so desperately deserve.