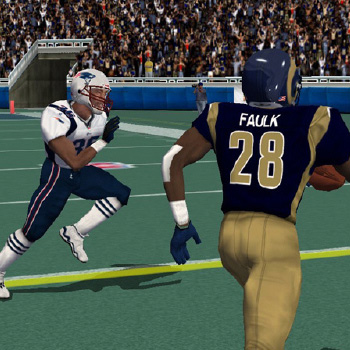 In the game you control the ball by players of your favorite team to win the match. Opposite players also has tactic commands of their coach to take the ball from you.

The game for first time features on-line gaming capability and also adds new teams like Houston Texans, and new NFL division alignment.The game also has Create-a-Player option, where the players can determine in mini-games their physical conditions, for example, to be receivers or quarterbacks. Later you can include these players into teams. However, there is also availability to trade players instead of train them. Also the game has an option, which allows to play from playbook and then practice it.

In XBox, Windows, PS2, PSX, GameCube versions the commentary is provided by Al Michaels. The game has rendered graphics with all animation based on it.

The GBA version has graphics similar to Madden '94 for SNES and Genesis, but has multiplayer mode using GCN/GBA cable.

The game is up to 4 players.