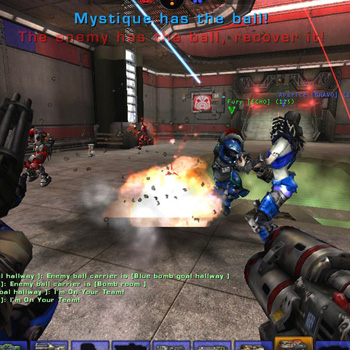 Unreal Tournament 2003  thrusts gamers back into bloodthirsty, action-packed arenas as the ultimate techno-gladiator of the future. Using the latest in Epic's Unreal technology, the game redefines multiplayer action with up to 32 players in a server with lightning fast net code. The technology is augmented by the advanced and renowned Karma math engine for in-game physics that simulates true-to-life character movement and environmental interaction. Key features of the game include:

Maps
The game features more than 35 indoor and outdoor environments, rendered in exquisite detail and crammed with volumetrically lit particle systems and more than 100 times more polygons per frame than the original game. Some original levels such as Curse have been recreated and redesigned and are joined by all new arenas like the sinister Inferno and the massive and snowy Kalendra.

Weapons
Keeping with the franchise history, Unreal Tournament 2003  stocks players' combat arsenals with a smorgasbord of ferocious, flesh-chewing weaponry. The armory includes fan favorites from Unreal Tournament  like the Flak Cannon, Shock Rifle and a retuned Rocket Launcher as well as all new and twisted innovations like the Link Gun, Ion Cannon and totally redesigned Sniper Rifle.

Characters
Players can select from up to 48 individualized characters, each with unique abilities and origins, to play as or against. Each character model is created with unprecedented detail utilizing high polygon counts and high resolution textures.

Special Moves
Player abilities are enhanced with special game moves, such as double jump and the dodge move. Collecting "Adrenaline" from around the arenas will enable further power-ups like health regeneration, invisibility, increased damage and increased speed.

Unreal Editor
As with all Unreal products, the fan community is well supported with development tools bundled into the game software. Amateur mappers and development teams will find the redesigned Unreal Editor to help them build custom maps and modify the game to create their own gameplay modes. Unreal Tournament 2003  tools also include pre-fabricated sections of architecture to make level design and construction easier.