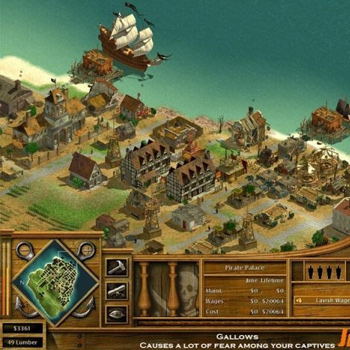 Tropico is a real time strategy game that mixes elements of Sim City, the various Tycoon games, and even a little of the Sims into a city-building, managerial type game in a unique location.

You are the recently elected/installed/victorious (depending on how you achieved office) president of a small Carribean island named Tropico. Before you lies a small community of people and a lush, rich island to improve or exploit at your will. You can become a benevolent ruler who brings this third world country into the realm of economic superpowers or you can be a ruthless dictator whose sole goal is to leech as much personal wealth as he can from the populace before they get the courage to rebel.

Using a modified engine from their previous game, Railroad Tycoon II, PopTop Software utilizes isometric graphics on a 3-D terrain to represent the island. Clouds float overhead, sometimes throwing lightning down, people walk from their homes to their chores, and hills and forests get leveled in the name of progress. All this happens at the user-specified speed and its the main user interface as players specify new construction, lay down edicts, and keep tabs on their citizens.

Each citizen is his or her own entity, with their own names, relationships to other citizens, wants and desires. Some feel the need to excel in studies, others seek religious enlightenment, some just want a good time. They even take political affiliations and work towards those ends. The citizens of Tropico do not blindly follow orders, they must be persuaded through meeting their desires, or just pure greed or terror. If you wished, you could follow the life of a citizen from childhood through his/her teenage years, through the course of several jobs, all the way to retirement and death.

A single-player only game, there are both set scenarios and random islands to play through, with various difficulty levels including a sandbox mode that allows you to play around without worrying about money or political ramifications.