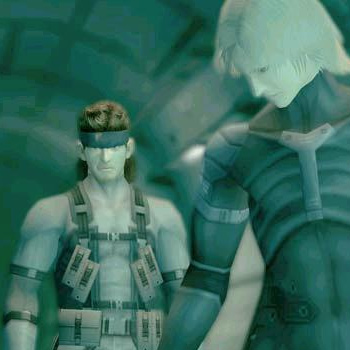 In the sequel, you once again resume the role of Solid Snake. You start the game in the rain, with a tranquilizer gun, which put the guards to sleep (instantly if you perform a successful headshot). There are a host of weapons to be picked up through out the game, some old, such as the FAMAS and Socom, and some new, such as the AK-47.

Snake can perform all his old moves, as well as some new ones. Martial arts combos can be used to disable guards. He can crawl through small spaces, peek around corners and perform acrobatic leaps to get away. Snake can also hang from railings, effectively hiding from guards. He can also stick his gun in a guards back, surprising him. The cardboard box is also back, and can once again be used for hiding.

Snake has his usual array of gadgets, his sneak suit and others can be found along the way, a mine detector, thermal goggles. The radar from the original game is still there and alerts you to guards positions and also shows you their field of view. As in the original though, if an alarm is sounded the radar is disabled while you escape. In some situations you will need to enable the radar before you can use it.

The codec is also back. It is once again integral to the story, and even comes on sometimes in the heat of battle. If you get stuck in the game, it provides hints on what to do. Repeated calls yield more intuitive help on what to do.

The guards in the game are a lot more wary in the sequel. If you get spotted by a guard, he will call for re-inforcements. You have a few seconds before he does this so you can shoot out his radio and disable him. However, other guards check why their buddy hasn't reported in and will come looking for him.

All the cutscenes in the game use the in-game 3D engine, seamlessly blending action and story. All the characters movements are motion captured animations. All locations feature interactive environments, such as, shooting a bottle which will shatter into fragments or ice that actually melts if you stick around to watch it!

The music in the game changes with the action, if you get into heated battle, the music becomes frantic, and slows down once the battle is over. Some sequences in the game even support Dolby 5.1.