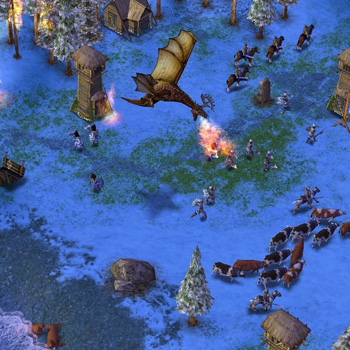 From Ensemble Studios, the creators of Age of Empires and Age of Kings, comes Age of Mythology, a game that transports players to a time when heroes did battle with monsters of legend and the gods intervened in the affairs of mortal men.

Taking on the role of one of nine ancient civilizations, players guide their people to greatness by commanding all aspects of their empire: gathering resources, raising massive armies, waging war against enemies, establishing profitable trade routes, building new settlements, enhancing production or military might with improvements, exploring new frontiers, and advancing through four distinct ages.

Which god power do you secretly posess? Are you likely to break out the lightning bolts or drown your enemies. Take our Which God Are You quiz and find out!

In their struggle for supremacy, players can use mythological creatures like Minotaurs and Cyclopses to bolster their armies' strength. Players may also call upon the gods for assistance in flattening enemy towns with meteors or scattering opposing troops with lightning storms.

All of this is brought to life using a revolutionary 3D engine developed by Ensemble Studios. The engine is capable of providing the most realistic, beautiful, and immersive world ever seen in a real-time strategy game.