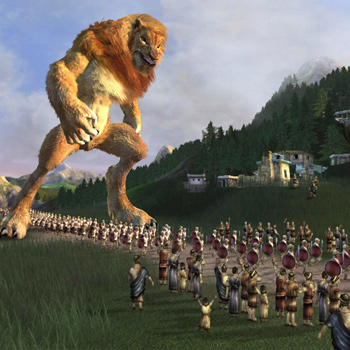 Spiritual descendant of the Populous games, Black & White is a 'god' game, where you play a fledgling diety, called upon by people in need.

Entering the 3-D world, you can manipulate objects, move people and boulders, and cast miracles. To assist you, you will discover a creature with its own intelligence and personality. Both you and the creature will evolve during the course of the game, becoming benevolent beings, cruel tyrants or somewhere in between. As you both develop, both the creature and the land itself will change, depending on your alignment.

Although the main purpose of the game is to work your way through the five lands of Eden and win the faith of as many of the tribes as possible, the game is somewhat open ended in the aspects of wandering around exploring and developing your creature.

The creatures in the game feature their own artificial intelligence and will grow like a child, both physically and emotionally. They'll learn from your example and put together their own moral codes based on what they witness and learn. You can pet or scold your creature, nurture it, spoil it, or abuse it. In the end, Black & White is part strategy game, part role-playing game, part child rearing simulator, and part self-examination of the player's personality.