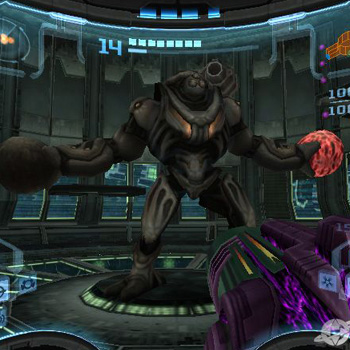 Long ago, a bird-like race of creatures (called The Chozo) became extremely advanced technologically, but due to increasing violence in the universe they began to hide themselves and live more simple lives. On the planet Tallon IV was one of several colonies they built. Years later, a meteor crashed on Tallon IV releasing a strange element called Phazon into the planet. Phazon poisoned anything it came in contact with, causing the plant and animal life to either die or be mutated into a hideous form. The Chozo tried to control the power of Phazon, but failed. Before abandoning the planet, they were able to cover the impact crater with a temple and seal Phazon into the planets core. Now the Space Pirates have discovered Tallon IV and have moved in to study Phazon and harness its power. They have also began rebuilding their fortress on planet Zebes and reviving the Mother Brain, Ridley, and Kraid which were all destroyed by Samus Aran. However, Samus has tracked the Space Pirates to Tallon IV and must now enter the planet to destroy them once and for all before they have a chance to rebuild their destructive forces.