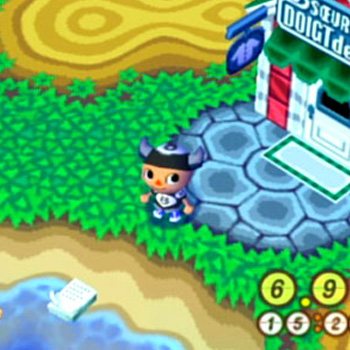 Animal Crossing, dubbed a "communication game" by Nintendo, is an updated version of Animal Forest + on the Nintendo 64.

In Animal Crossing, you arrive at a new town (named by you). You play as one character (who you also name) throughout the game. For an example, I named my character James, after me, and the town Toronto, after the city I grew up in.

Animal Crossing has no set goal; instead, it's more of a Sims type game, in which you can do what you want, when you want, without no rules, goals or time limit.

When you first arrive, you will be given a house to live in. Unfortunately, you have no money, so the owner decides to make you work at his store. You can perform various tasks, such as planting flowers and trees around the store, in which you get paid in "bells", the game's form of currency. There are also other ways to make money; you can perform various tasks for the other citizens of the town, you can fish and then sell your caught fish, you can collect items and sell them, or you can just "find" money.

The most unique feature of Animal Crossing is it's use of the GameCube's internal clock. The game will run according to what your clock is set at. If your GameCube clock says it's 2:45 in the afternoon on October 1st, the game will take place at that time. If you don't play the game until October 5th, the game will pick up on October 5th. The game also uses the clock to serve a night/day cycle, a seasons cycle, and a festivities cycle. When your clock reads December 15th, the game will show snow on the ground and snow falling. When the clock reads December 25th, you will see various Christmas activities, such as Santa suits. The same applies to Halloween, Valentine's Day, etc. The game also has a night/day cycle, meaning if you play the game at 4:00pm, it'll be bright, and if you play at 11:00pm, it'll be dark.

Another unique feature is the game's item system. If you wish to give an item to a friend over the Internet, you go to the store (in the game, that is), choose the item, enter your friend's name and town (exactly), and you will receive a code. You then give this code to your friend, who will type it into the game, and then receive the item.

Another feature of the game is its compatibility with the GameBoy Advance. You can use the GBA to go to an entirely new "island" where you can create patterns that are found in the game, then transferred to your save game. AC is also compatible with the E-Reader, an electronic card swiper which allows you to play old NES games, such as Donkey Kong.

Among the other features of the game is it's message system, it's letter writing system, and the interaction between you and the various inhabitants.